Slow cooker chicken soup Indian style – Enjoy the cool breeze in the air with this comforting soup recipe. With chicken and plenty of nutritious veggies slow cooked in aromatic spices, this will be the most flavorful soup recipe in your repertoire. 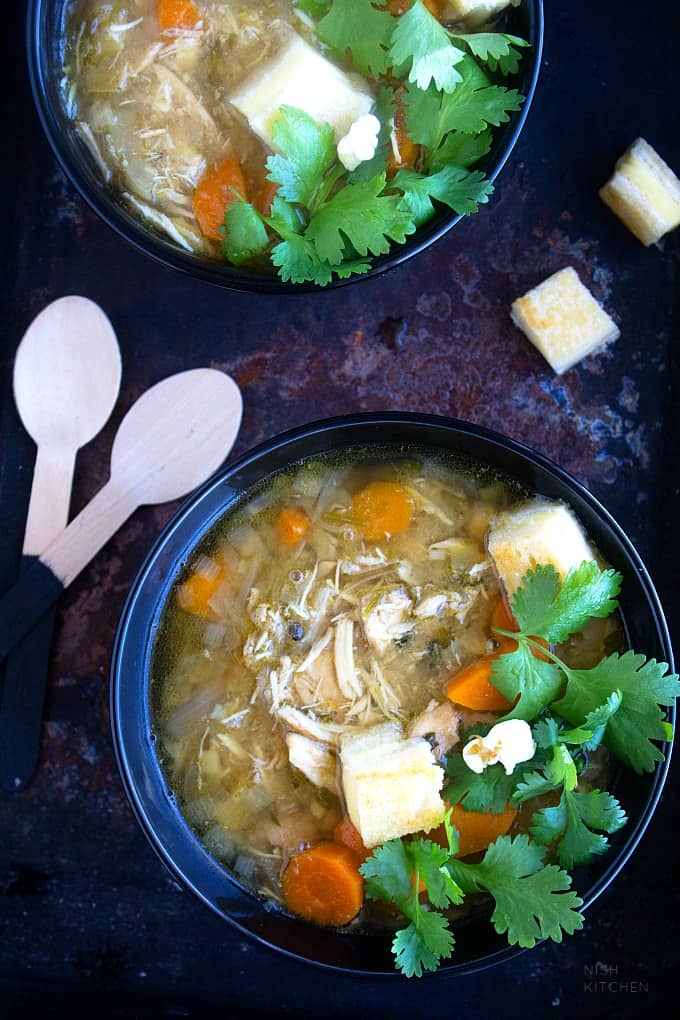 I decided on this recipe with just one thing in mind – autumn and the cooler winter days ahead. You know, slow cooker recipes and soups are always a win-win during the cooler months. Even the slightest chill in the air reminds me of my slow cooker. So guys, it’s time to get your slow cookers out, and whip up something comforting and delicious.

This cozy soup literally gets that slow cooker flavor magic as the chicken is cooked slow and low for hours. But, trust me, the recipe is super simple too. You just need to pop everything in the slow cooker in the morning to enjoy hot dinner when you come home in the evening. Isn’t that such a brilliant cooking appliance?

For this slow cooker chicken soup recipe, we’ll also add in few veggies like carrots and leeks. Depending on the seasonal availability of the vegetables, you can use your favorite veggies. For instance, celery, potatoes, and root veggies like parsnips pair perfectly with chicken. Frozen vegetables like broccoli, green peas and green beans that are easily available from grocery stores also make great addition to this soup.

Apart from vegetables, another highly nutritious ingredient that you can add to this slow cooker chicken soup are lentils. I personally prefer masoor dal (red lentils) in this recipe. Masoor dal cooks faster than other lentils and makes the soup really flavorful. It also adds more richness to this soup.

As we’re talking about Indian style soup, this recipe is not complete without aromatic traditional spices. So, we’ll spice up this chicken soup with bay leaves, peppercorns, ground cumin, ground coriander and chili powder. As you can see, the small amount of butter certainly takes this recipe to a whole new level. If you’re after a healthy version of this chicken soup, feel free to sub with more oil. Add plenty of herbs like coriander (cilantro) and mint leaves for another level of flavor. Even though we’re using very simple ingredients in this recipe, all the flavors add up to create one killer soup recipe that’ll you’ll be making over and over again.

With the chicken used in this recipe, boneless is the way to go. Chicken with bones may take a very long time to cook. You’ll also need to discard the bone before serving. So, keep it simple. Slow cook boneless chicken, shred, and pop them back in the slow cooker to absorb all the flavor. We’ll also pour in chicken stock to double the flavor.

Choose low or high setting to cook this slow cooker chicken soup. As I mentioned, I prefer the low setting as the chicken cooks slowly in the flavorful spices and liquid in the slow cooker.

Again, you can serve this soup in so many ways. Light dinner or lunch, appetizer or just to warm up your soul in the cooler months. I love this soup hot straight out of the slow cooker. So, plan ahead, and make this comforting soup that tastes out of this world. 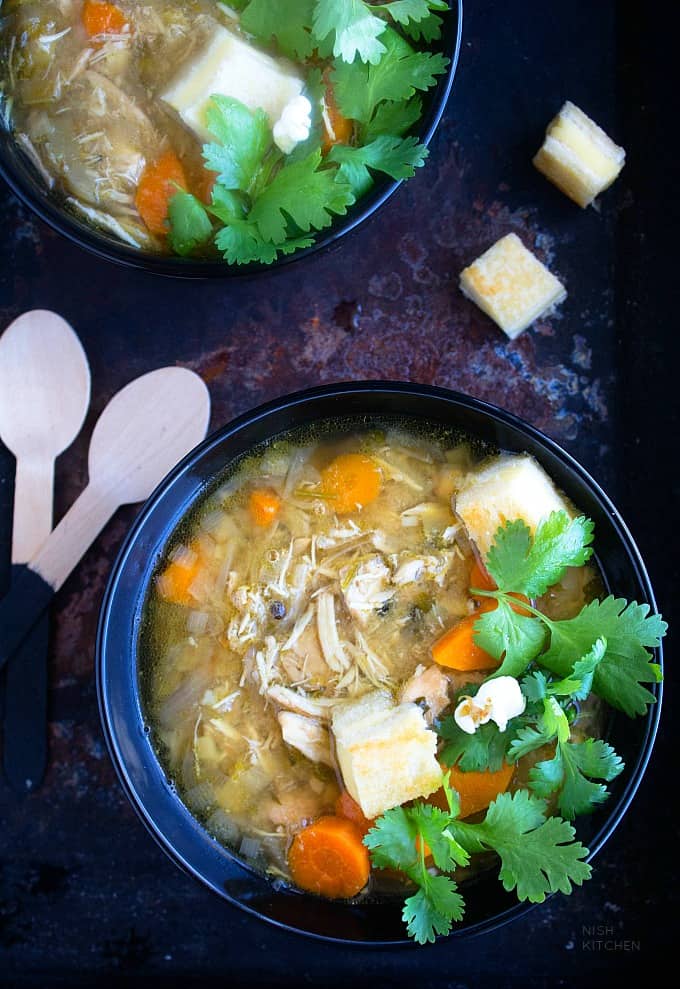 - To make this soup on stovetop, place all the ingredients in a large pot. Simmer for about an hour or until chicken is cooked through.
- Add masoor dal to the soup if you like
- To freeze this soup, thaw to room temperature, and freeze in small freezer safe containers for up to a month. Thaw soup in refrigerator. Reheat before you serve. 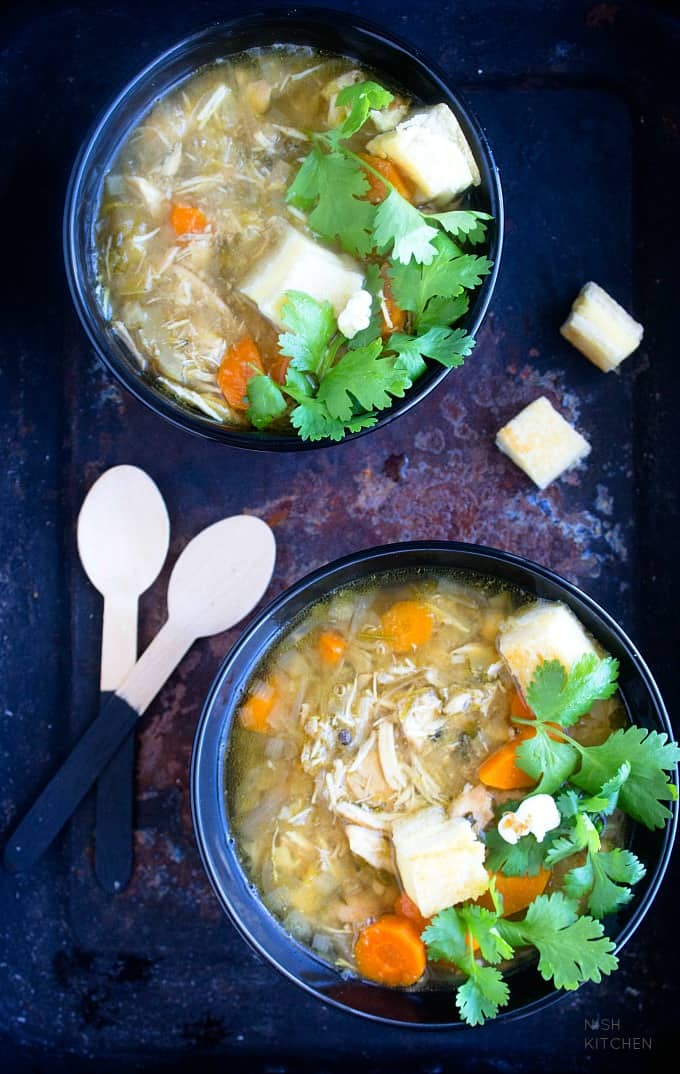 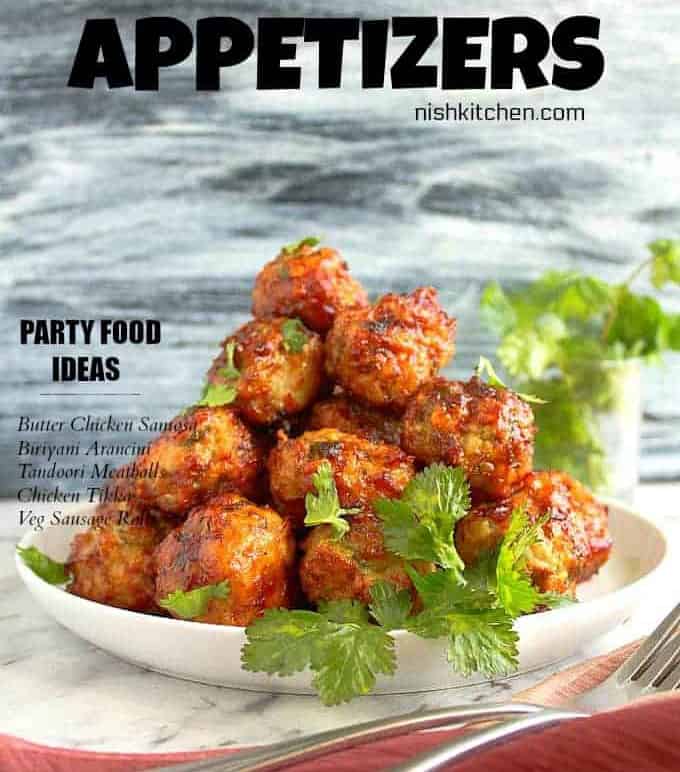